The Silver Slugger award winners were announced on Thursday, and Ryan Zimmerman has another shiny trophy, winning the award for third basemen. CONGRATULATIONS, RYAN!

The top two contenders for this award among third basemen were Zimmerman and the Giants’ Pablo Sandoval. Here’s a look at their offensive stats:

the
Louisville Slugger Silver Slugger Awards are the top offensive honor in
Major League Baseball. Coaches and managers of Major League teams vote
for the players they feel are the best offensive producers at each
position in the field in both the American and National Leagues. They
base their selections on a combination of offensive statistics
including batting average, on-base percentage, and slugging percentage,
as well as the coaches’ and managers’ general impressions of a player’s
overall offensive value.

I love Zimm…he and John Lannan are my favorite Nats players. I’m very happy for Ryan and think it’s great that he won this award, along with his Gold Glove award. But unlike the Gold Glove, this award was not exactly a slam dunk for him. Both Zimm and Sandoval had great offensive seasons, but if you look at the stats above, one could make just as strong a case for Sandoval. Zimm scored more runs, and had more home runs, RBI, and total bases, but Sandoval’s on-base percentage, slugging percentage, and batting average were better. In particular, Sandoval’s batting average was 38 points higher than Zimmerman’s. I’m guessing that what tipped the scale in Ryan’s favor was his 30-game hit streak, which I believe was the longest in the majors this season. 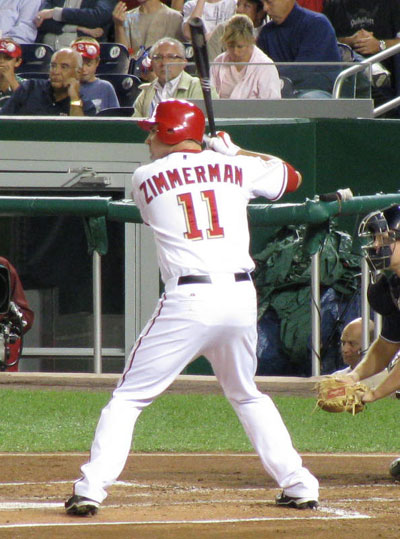